The Story of Prometheus 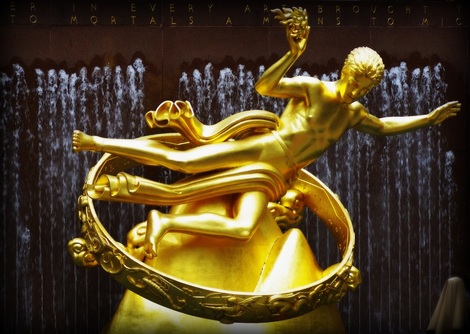 According to Greek mythology, Prometheus was a Titan who sided with the Gods during the conquest of Mt. Olympus. He is credited with creating mankind out of clay to stand upright and look and function as the Gods. His patron Goddess, Athena breathed life into them.

Throughout the early stages of human existence, men spent their days in a constant fearful awareness of the inevitable: death. They lived naked, hungry, cold and uneducated. Prometheus felt this was wrong and asked the Gods on Olympus to do something about it. They refused, claiming men would come closer to the Gods if allowed to cultivate imagination, creativity and ambition. Mortals by definition must die, and Prometheus could do nothing to change that. Though he could not
save them from death he desired to instill hope for a bright future and possibilities for growth and development during their years on earth. He snuck up Mount Olympus and took fire from the hearth of the gods by stealth (some say he stole it from Apollo, the sun-god; others claim he took it from right underneath Zeus’ nose by plucking one spark from his thunderbolt). Either way, Prometheus hid the spark in a fennel stalk then ran down the mountain with such speed that his feet hardly touched the ground. It was as if he were flying. Prometheus taught them the use of fire, made them acquainted with architecture, astronomy, mathematics, the art of writing, the treatment of domestic animals, navigation, medicine, music, dance, the art of prophecy, working in metal, and all the other art forms. Man’s constant foreboding of doom was replaced with light, warmth, hope and ambition. Through the gift of fire and education Prometheus bestowed to earth all the arts and crafts that enable mortals to prolong life and to improve its quality. That one, tiny spark made all the difference, lifting humanity to a higher level, causing imagination and creativity (originally activities saved exclusively for the Gods) to become a way of life for men. “So, to put it in a word, all human arts came from Prometheus.” * (Aeschylus 252, 445, &c., 480, &c, * Prometheus Bound 500, 501)

Zeus became angry with Prometheus for making men to be so near the likeness of the Gods. He ordered mankind to make animal sacrifices in order to show they were obedient and worshipful. In a dispute over which parts of the animal they should keep and which to give to the Gods Prometheus was chosen as arbitrator. Prometheus tricked Zeus by covering the meat in the disgusting stomach sac of the animal and then covering the bones with the rich layer of fat and letting him pick which he wanted. Zeus picked the bones covered in fat. From that point on humans sacrificed bones as burnt offerings and kept the meat for feasting.

In his wrath, Zeus devised “such evil for them [humankind] that they shall desire death rather than life, and Prometheus shall see their misery and be powerless to succor them. ” Zeus had Prometheus carried to Mount Caucasus, where he was bound to a rock and consigned to eternal misery. Each day an eagle swooped down on him and ate the lobes off his liver, which would grow back each night.

Many years earlier, Prometheus, whose name literally means “foresight”, had warned his brother Epimetheus not to accept any gifts from the Olympians. With Prometheus out of the way, Zeus told Hephaestus (Vulcan) to mingle together all things and their contraries and mold it into the shape that he described. The first woman was created. She was as beautiful as a goddess. Zeus named her Pandora and sent her as a gift to Prometheus’ brother. Epimetheus, though forewarned, was love-stricken, and he and Pandora wed. Zeus presented them with a beautifully wrought box with orders never to open it. Pandora’s curiosity got the best of her and when she opened the box all the evils Prometheus had locked up that could plague mankind were released. In the bottom of the chest, hope was hidden and was the last to escape. Prometheus could do nothing but look upon the chaos, sickness, poverty, war, suffering and despair that was unleashed upon those he loved. However, the effects of the gifts of fire, knowledge and hope he had given them soon outweighed the vices and there began an era of enlightenment for man.

Prometheus was eventually freed from his chains as a returned favor from Hercules. Since Zeus’ word was law and could not be repealed, Prometheus was destined to be bound to the rock for eternity. To appease the law, a ring was made out of a link of the chain and a chip of the rock was mounted on the ring, which Prometheus wore forevermore.

In modern society a symbolic torch is run from city to city and through each continent before the commencement of the Olympic games in honor of the original Promethean Gift of fire stolen from the Gods. We also see that modern society pays homage to Prometheus in the continued tradition of wearing metallic rings inlaid with stones. Throughout history, Prometheus has symbolized unyielding strength that resists oppression. He is known as the great benefactor of mankind. To this day, the term Promethean refers to events or people of great creativity, selflessness, intellect and boldness. The spark itself refers to the human soul, divine ambition and anything we might share with others that elevates to a more enlightened, joyous, productive and beautiful world.